From the Desert to the Depths of the Ocean 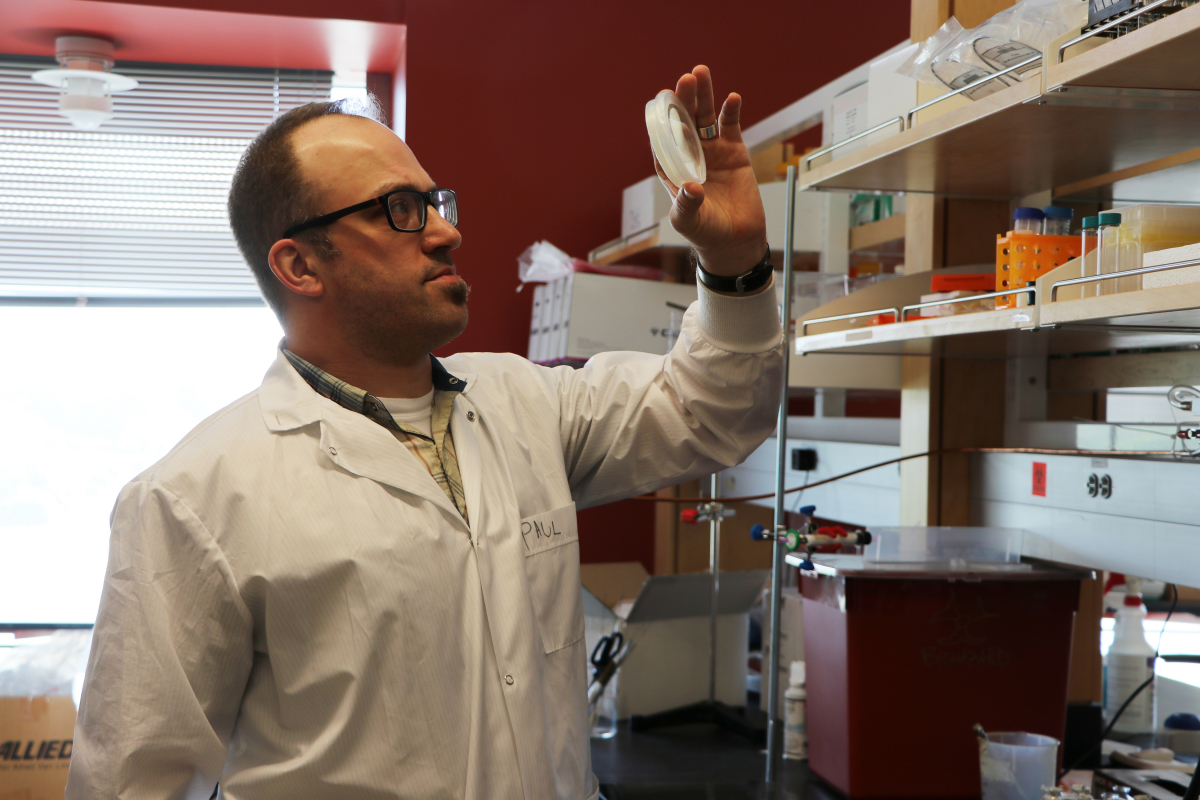 Paul Carini, an assistant professor of environmental microbiology in the Department of Environmental Science and BIO5 Institute member, is the recipient of two early career awards that will allow him to study microbial resilience in harsh environments—from the desert to the depths of the ocean.

This past month, Carini was recognized with a 2022 Faculty Early Career Development (CAREER) award from the National Science Foundation (NSF). The organization’s prestigious CAREER award program is designed to support junior faculty members, “who have the potential to serve as academic role models in research and education and to lead advances in the mission of their department or organization.”

Over the next five years, Carini will use the $1.5M award to understand what contributes to the resilience of soil bacteria living under extended dry periods in arid and semi-arid climates. In these regions, soil microbes face extreme stress from increases in temperature and drought that lead to severe soil drying.

“We know that some microbes have a strategy to cope with drying—they go into hiding and form what's called a spore, which is basically a protective shell on the outside of the cell. They can persist in the spore state for long periods of time and emerge when growth conditions are more favorable,” Carini explained.  “But most soil microbes cannot form spores. We are investigating how non-spore forming microbes survive without water.”

The processes through which non-spore forming microbes persist in periods of extended drought are not well understood. Leveraging an extensive collection of more than 3,000 bacterial cultures from Arizona soils, Carini’s work could inform future, low-water agricultural practices.

“A third of the world is arid or semi-arid and about half of the world's population lives in those regions. The prediction is that these areas are going to expand with climate change and that's going to really affect food production in those regions, as well as the ability of arid soils to sequester carbon” Carini explained.

“Getting a handle on how microbes are adapted to cope with that is going to help us, for example, engineer microbial inoculants that could be used to facilitate the growth of agricultural crops in arid regions.”

From the desert to the deep ocean

Carini was also recognized by the Simons Foundation and presented the 2022 Early Career Investigator in Marine Microbial Ecology and Evolution Award. With the $660K award allocation, Carini will investigate how bacteria in the depths of the ocean are able to survive, despite being isolated in 6-million-year-old deep-sea sediments.

It all comes down to growth rate, or something biologists refer to as doubling times.

“When we talk about doubling time, that's the time it takes for one bacterium to divide into two,” Carini explains.

In soil, bacteria can double in two or three days in nature. In the lab, under careful enrichment, they can double much faster than that, in some cases on the order of once every four hours, according to Carini. E. coli, for example, can double once every 20 minutes.

So how long does it take bacteria at the bottom of the ocean to double? About 100 years, perhaps thousands of years, according to Carini. It depends on the microbe and the ocean location.

Carini will be working with bacteria that were deposited in deep-sea sediment roughly six million years ago.

“They're effectively not growing on human time scales. We can't observe them growing but they're not dead and the evidence of that is that we can culture them again. Under the right conditions, they wake up again in the laboratory,” Carini said. “In nature, it’s not uncommon for microbes to halt their growth. And thank goodness, right? There are so many microbes on Earth that if they all grew at the rate of E. coli, by tomorrow afternoon we would be under a foot of microbial biomass.”

Why does it matter how long it takes bacteria in the ocean to double? It all goes back to carbon dioxide. The bottom of the ocean is a major sink for carbon through a process called the biological pump.

“Basically, phytoplankton in the surface ocean convert carbon dioxide in the air to organic carbon. That organic carbon is transported through sedimentation to the bottom of the ocean. On the seafloor microbes recycle the deposited organic carbon back into carbon dioxide,” Carini explained. “And a major focus of microbial oceanography is to try and understand the efficiency of that process and how to lock more of that carbon down at the bottom of the ocean for a longer period of time.”

Understanding the biology of how bacteria at the bottom of the ocean process this carbon likely has implications for the search for life on other planets, too, according to Carini.

“Really, it’s about trying to understand how life can thrive in these really narrow bands of energy availability,” Carini said. “That can be in the desert, that can be at the bottom of the ocean. Or perhaps on other planets.”